In January 9th BATWG sent a letter to the BART directors listing factors that were causing some BART riders to avoid using BART, especially during nighttime and other light use hours. The Bay Area News Group (BANG) gave our statement a lot of play in its newspapers and as a result BATWG has received a great deal of positive feedback. Here are excerpts from the January letter:

“At a time when Bay Area traffic congestion has become the 2nd or 3rd worst in the entire U.S. it is disturbing to find transit ridership dropping. In order to reverse this destructive trend a greater effort must be made to identify, reduce and ultimately eliminate the factors causing would-be transit riders to turn away at a time when more transit riding is needed. One of the [locally] most of damaging of these negative factors stems from the inappropriate actions of some individuals in and around BART stations and on BART trains.”

“Most transit patrons are intent upon getting to their destinations and prefer to be left alone to read, sleep, engage in private conversation or use their cell phones. But in today’s world that is often not possible. It doesn’t take a million dollar study to recognize that riders who frequently witness or experience fare evasion; theft; spaced out drug addicts; drunks sprawled across two or three seats; loud music; acrobatic panhandling; abusive or profane language, or obnoxious and even threatening acts, are less than happy with the situation…” 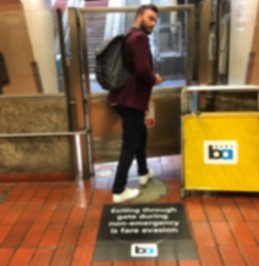 “So what to do about the problem?…..One important security measure that has not as yet been adequately deployed is video surveillance….”.

“We are convinced that most riders would much prefer to be video-taped than offended, bullied, threatened or victimized. To detect, apprehend and perhaps deter inappropriate actions, cameras should be mounted where and as necessary. And it goes without saying that to be effective a video surveillance system must be accompanied by diligent monitoring and vigorous follow-up.”

From what we’ve heard and read in the last two months,  it’s pretty clear that the vast majority of BART riders want less fare evasion and less disturbing and sometimes threatening behavior. We think that the BART Staff has some sound ideas on how to improve things in this regard. However it appears that certain BART Board members are unaccountably holding back.  If you agree that the security of the BART riders is of paramount importance please let your feelings to be known to the BART Board.