Mayor Garcetti’s plan may or may not gain traction. But at least he’s taken a strong stand.

Excerpts from Sammy Roth’s May 6, 2019 article in the Los Angeles Times

The mayor’s sustainability plan imagines a city where, by the mid-2030s, 80% of the cars run on electricity or zero-emission fuel, 80% of the electricity comes from renewable sources and Angelenos drive 2,000 fewer miles each year than they do now. It’s a far cry from today’s L.A., where gridlock, tailpipe pollution and smoggy air have come to define a way of life.

Garcetti cited the “existential threat” of climate change, which scientists say is fueling bigger and deadlier heat waves, wildfires and floods in California and around the world. He said he worries that if Los Angeles doesn’t take aggressive action now, in 50 years the city will have little time for priorities other than survival.

“Los Angeles needs to lead, but the whole world needs to act. This plan gives us a fighting chance,” Garcetti said in an interview. “It’s sort of a ‘greenprint’ for every other city in the country and the world, hopefully.”

Garcetti is pitching the plan as L.A.’s version of a Green New Deal, the set of climate change and economic justice policies popularized by progressive activists and championed by Rep. Alexandra Ocasio-Cortez (D-N.Y.).

City Hall may have limited control over whether L.A. meets many of the targets in the plan, which updates a previous sustainability road map from 2015 and has been in the works for several years, before the phrase “Green New Deal” entered the national lexicon. At times, the plan simply reiterates existing commitments on climate and clean energy, and details for how many of the goals will be achieved are yet to be determined. But in at least two areas, the plan sets ambitious new targets and lays a foundation for how they might be met: transportation and buildings, which account for three-quarters of the city’s planet-warming emissions. 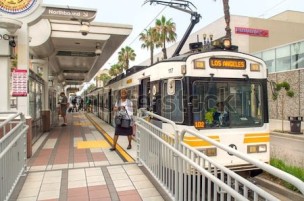 On the transportation front, the mayor’s office hopes to reduce the amount of time Angelenos spend driving, from an average of 15 miles a day now to 13 miles by 2025, and 9 miles by 2035. The plan envisions making that possible largely through initiatives already underway, including a massive build-out of public transit and a proposed “congestion pricing” pilot that would make driving more expensive in some traffic-choked areas. More significantly from a climate emissions standpoint, the plan calls for increasing the percentage of electric or zero-emission vehicles in the city from 1.4% last year to 25% by 2025, 80% by 2035 and 100% by 2050. Choosing a car can be a financially fraught, and intensely personal, decision. But the costs of battery-powered cars continue to fall, and city officials say they can accelerate the transition.

The mayor’s plan sets a target of 28,000 publicly available electric-vehicle chargers by 2028 — up from 2,100 today — with the city streamlining permitting for chargers, expanding rebate programs and requiring more chargers through the building code.
The Department of Water and Power will also develop incentives for customers to buy used electric vehicles, according to Lauren Faber O’Connor, the city’s chief sustainability officer, who helped craft the mayor’s plan.

“We know that the secondary market is really important to proliferate the adoption of EVs,” she said.

The plan also mentions self-driving cars, saying the city should “ensure all autonomous vehicles (AVs) used for sharing services will be electric by 2021.” Garcetti expressed high hopes for driverless technology.

Antonio Bento, an economist who leads USC’s Center for Sustainability Solutions, described the goal of 80% zero-emission cars by 2035 as “overly optimistic” and unlikely to be met. But setting such a lofty target could still do a world of good, Bento said, because it sends a message to the private sector that one of the globe’s most car-dependent cities is moving away from oil as quickly as possible.

“The rest of the world, when it comes to these types of policies, they look at Southern California for guidance,” said Bento, who is working with former Gov. Arnold Schwarzenegger and former state Senate leader Kevin De Leon on an initiative to help local governments speed the adoption of cleaner transportation options. “What appears to be a policy set by one city could quickly grow to capture a large part of the automobile market.”

This article was featured in Newsletter Issue 13. Click here to go back to the newsletter.