Over the last few months, Mayor Breed’s Muni Task Force has been engaged in identifying and finding solutions to Muni problems. On November 22, 2019 BATWG sent initial comments to Controller Ben Rosenfield, whose office is administrating task force work. Based upon the Task Force’s now released draft report, here are a few observations, some of which were alluded to in the previous letter. 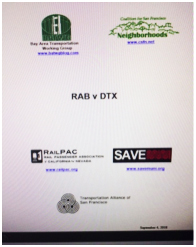 Late last year the Transportation Alliance of San Francisco (TAOSF) in association with other groups issued a 1424 word report, the product of six months of careful deliberation by a highly-experienced group of transportation experts. The report, which contains 20 recommended ways of improving San Francisco’s transportation condition, was sent to dozens of City officials in late 2018. No responses were received. Below are four excerpted recommendations which appear to be of particular relevance to the Task Force’s work.

From the SFMTA GOVERNANCE AND ORGANIZATION Section of the TAOSF Report:

Observations in response to the Task Force’s Draft Report:

When contemplating the upgrading or replacement of a highly complex technical system such as the Muni’s Automatic Train Control, it is critically important that before awarding a hugely expensive long-term implementation contract to a rail signaling firm, that the Muni know exactly what it’s getting and why.  Independent expertise is therefore essential.  In most cases the prudent thing for a public transit agency to do is to bring in a reliable ATC specialty firm with no skin in the game and no connections to the firms seeking the actual design and/or installation work.

The Task Force report appropriately alluded to some of the changes that will be needed to improve the Muni Metro operation, including the aforementioned improvement and eventual replacement of the ATC.  However not enough attention  was given to one key aspect of the problem; namely, the advantages of running fewer but significantly longer peak period trains in the subway.

In section 5b the hiring of 50 “transit supervisor positions” is mentioned.  If by transit supervisors they mean what used to be called line managers, they’re right on target.  In the past, conscientious line managers, placed at the right “pinch points” throughout the bus and rail network at the right times of day used to prevent many of the problems that afflict Muni’s current operation.

As was alluded to during the Task Force’s December 13th meeting, more attention should be paid to the traffic emanating from outside San Francisco. According to MTC, by 2025 a total of 700,000 automobile trips a day will be crossing the Bay Bridge and San Francisco/San Mateo County Line. Needless to add this large influx will increase city traffic congestion and adversely affect Muni surface operations. Securing the regional changes needed to reduce incoming traffic will require that the MTA, CTA Mayor’s office and Board of Supervisors tackle the problem in a coordinated manner with determination and persistence.

The MTA’s Capital Project Delivery system is also in need of major attention. Beefing up the design review function is essential. So is upgrading the management and administration of the design, environmental clearance, procurement and construction contracts. Significantly speeding up the process from start to finish would lead to some remarkably positive results.

With a small group of dedicated and competent contract managers, a public agency can control outside consultants and contractors very effectively. Yet the natural tendency whenever a new problem arises is to hire more people.  In many instances it is better and certainly cheaper to outsource the work than to hire permanent staff, who tend to remain on the payroll long after the need for their services has passed.