Livable California is a Statewide group that has sprung up to counter a State Senate juggernaut intent upon jamming in high density housing virtually everywhere in total disregard of what neighborhoods want, affected towns and cities want and affected counties want. Thanks to a significant degree on the hard work and organizing of Livable California, last year’s SB50 went down to a well deserved defeat, in large part because of the State’s one-size-fits-all, meat ax approach to a problem that should be addressed with discretion and flexibility, taking varying locations, densities and neighborhood conditions into account. 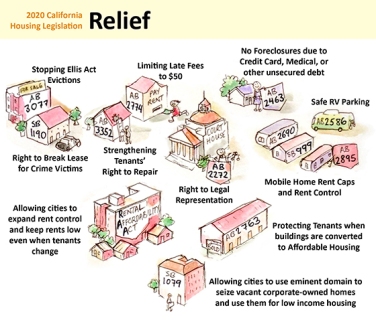 The ever-active State Senator Scott Wiener has now, Phoenix-like, re-assembled the tenants of his defeated bill, as embodied in at least nine separate replacement measures, each taking its own bite of the apple. These replacements are not well coordinated. They feature overlapping and sometimes contradictory standards and varying ways of handling such critically important terms as “CEQA Exempt,” “transit-oriented,” “percent affordable housing,” “density bonuses,” and “Opportunity Area.”

As a regional transportation advocacy group dedicated to making it faster and easier to get around in the Bay Area, BATWG is particularly incensed by the continued perversion of the term:  “transit-oriented”, called in at least one bill as “transit-rich”, as defined by two State Agencies).  As originally used the term applied to housing or other uses that would result in a significant increase in bus and train use and a consequent reduction in the need for everyone to drive so much. As applied in SB50 and even more so in the replacement bills, there is virtually no correlation between how the new housing would be arranged and located and the transit-orientation of its occupants.

Because of the fallacious association of their developments with transit use, the CEQA exemptions and for other reasons, the threat of an ill-considered and heavy-handed State takeover of local and regional authority is even more ominous now than it was before. In fact it is doubtful that the legislative mishmash currently working its way through the Legislature could ever become anything more than a bureaucrat’s play yard and a nightmare for everyone else.

It is to be hoped that calmer and wiser heads within the State Legislature will recognize that what’s needed is a whole new approach to resolving California’s shortage of housing, especially in view of new employment and commuting patterns that have evolved since the beginning of the pandemic. If there is to be a State housing bill it needs to be well thought out, well coordinated and flexible and, most of all, developed in close cooperation with the affected neighborhoods, towns, cities and counties.