We’ve taken a hit. COVID is obviously no joke…not something to be taken lightly. While it’s too soon to predict exactly how COVID and its aftermath will affect society, there are a few observations that can safely be made.

Vaccine:  Yes, there could soon be a highly effective vaccine and/or other curative. If so, great….the sooner the better. But what if it takes longer than expected to make these curatives available? Or, what if there are troublesome side effects or if the vaccines and treatments aren’t fully effective? What if another vicious virus comes along, requiring us to go through the whole agonizing process all over again? Even if an effective, early vaccine does become available it will take many months to inoculate a large share of our population.

Working at Home:  Individual-by-individual and family-by-family, people are adapting. For many, this has involved working at home. Some are all for ending their long commutes; others would prefer things to return to the way they were. Some employers who traditionally resisted the idea of telecommuting are now seeing some advantages to the practice, including a reduction in the need for a large amount of high-cost downtown office space. Video conferencing has been widely used to good effect. However downtown businesses that serve commuters are hurting badly. This problem will most likely be resolved by a some kind of compromise. Some workers may find themselves working mostly at home or perhaps staying home for two days and traveling to their workplaces three days. Imagine a 30% or 40% drop in highway use, at least temporarily. Imagine the effect on the transit system ridership if the daily transit commutes dropped accordingly.

The Transit Agencies….Caught in the Middle:

Getting around by public transit has long been recognized as a way of assuring mobility while at the same time reducing greenhouse gas emissions and protecting urbanized areas from excessive traffic. But here’s what’s happening. 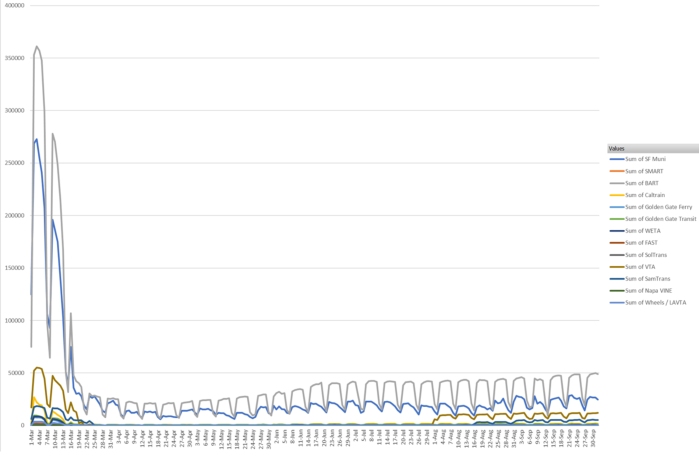 Suffice to say highway use is fast returning to “normal” while transit ridership remains in the doldrums. Travelers have clearly gained a new respect for the dangers of being jammed in cheek-by-jowl in crowded trains, buses and boats. People are now taking the need to socially distance more seriously, an attitude that could remain long after the scourge of COVID-19 is behind us.

Despite the virus there remains a long term need to convince commuters and other travelers to use trains, buses and ferryboats more and their personal vehicles less. For this to happen, the Region’s public transit agencies must stay in business by operating as efficiently, prudently and creatively as possible.

As everyone knows, transit agency revenues are way down and likely to remain that way for a substantial period of time. To make the transit agency changes needed to adapt to the new situation, some tough choices will have to be made. If transit revenues remain at or near today’s extraordinarily low levels, drastic budget cuts will be necessary. The service on some lines may have to be reduced or in some cases eliminated. Or it may be necessary to furlough or even lay off employees, or perhaps reduce salaries. Unfortunately some agencies have elected to simply wait and hope for an additional federal bailout while retaining all employees at full salary or, in one case, enjoying a 6% salary increase. But what if the anticipated federal largess doesn’t arrive?

Any organization, whether public or private, beset with greatly reduced revenues and continuing high costs is in trouble…whether it realizes it or not. If public transit is to remain an important factor in metropolitan areas as it should, the transit agencies must act to keep their costs in line with their revenues and to place a top priority on finding ways of safely accommodating more riders. For these reasons now is no time to be committing huge financial resources to service extensions and multi-million dollar street changes. Instead the transit agencies and regional planners must focus on temporarily cutting costs and improving the existing systems. The sooner they realize this, the better.