Skip to content
HomeValley Link Project – Still in its Infancy

Numerous outstanding questions that are critical to potential success or failure of the VL project remain unanswered. Chief among them:

Ridership Uncertainty:  Ridership is absolutely crucial to whether or not the VL rail project, or any passenger rail system for that matter, is successful. Unfortun­ately the VL ridership forecast is based on out-of-date pre-COVID travel behavior. COVID caused massive shifts to work-from-home and changes in corporate attitudes regarding the practicality of remote work, as well as a new approach to central office space needs – all of which will in all likelihood fundamentally change long term commuting and other travel patterns. Steadily advancing communications technologies are facilitating these changes. In its Bay Area 2050 Plan, MTC is projecting that the number of employed residents working from home will grow from 6% in 2015 to 25% in 2050. It is essential that the TVSJVRRA incorporate these and other societal changes into its deliberations.

Missing Travel Demand Information:  So far, only the projected VL rail ridership itself has been presented. Missing is I-580’s projected 2025 and 2040 peak period and daily traffic flows and the VL’s effect if any on I-580 congestion. Also missing is the impact that a VL service would have on peak period and daily ACE ridership, as well as on the ridership of local bus systems. 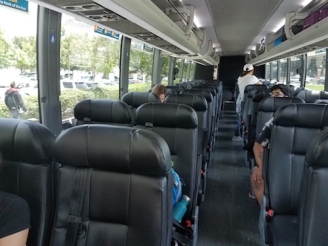 Alternatives:  The TVSJVRRA has not demonstrated that it has objectively considered and analyzed all viable alternatives. The only “alterna­tive” described in the VL Feasibility Study was a peak period, “bus on shoulder” option with connections to ACE trains at Vasco Road. This weak “apples/oranges” comparison is biased, inadequate and invalid.

Bus Alternative:  A high performance, comprehensive express bus network serving the Tri-Valley and San Joaquin Counties needs to be thoroughly examined. It could be implement­ed much sooner and at far lower cost than VL.  Such a system could be patterned after the successful, privately-operated hi-tech commuter buses serving major tech outfits in Silicon Valley (which carry at least 40% as many daily passengers as Caltrain does).1,2

VL rail service as currently envisioned would require $2 billion in expenditure before a single passenger could be served, and nearly $3 billion before the much-discussed rail service to North Lathrop would become available. The inherent flexibility of high performance bus services should be prized in this COVID era of dramatic travel pattern changes and future uncertainties.  The effect of combining a high quality bus service with tolled freeway lanes as outlined in MTC’s Plan 2050 should also be considered.

ACE Upgrade Alternative:  Does it make sense to operate two separate commuter rail services on two separate sets of tracks, operating in parallel through the Altamont hills? A co­ord­inated effort designed to both optimize the ACE operation and significantly improve transit connections to the East Dublin BART station warrants consideration.

Conclusion:  As BATWG has previously stated, TVSJVRRA has not yet come up with a credible approach of meeting desired Tri-Valley/ I-580 Corridor objectives. We commend the TVSJVRRA for the VL work to date and point out that the issues discussed above should be fully evaluated and taken into account.