On August 20, 2021 the Peninsula Rail Program Executive Steering Committee’s staff (IPMT) submitted 6 cost-cutting recommendations to the ESC. IPMT Report can be seen here. One of the cuts was uniquely ill-advised:

The Bay Area Transportation Working Group (BATWG) has long recognized the need to better integrate the Region’s many bus and passenger rail lines, and has therefore always strongly advocated for the early completion of the DTX project. The extension of the 78-mile north-south Caltrain line 1.3 miles to the Salesforce Transit Center is long overdue, and BATWG would support any recent action designed to speed up the process.

However the recommendation to delete the long-established Pedestrian Connector linking the Salesforce Transit Center with Market Street from the initial DTX funding package came as an unpleasant surprise, especially since it was made with no inkling about how such a connector would affect rail and bus ridership.

The Connector:  Integral to the DTX project has always been a subsurface pedestrian link ….including moving pedestrian walkways….extending from the mezzanine level of the Salesforce Transit Center to Market Street, and the Muni/BART Embarcadero Station. We strongly oppose and in fact are outraged by the uninformed and ill-conceived decision to delete this vital 843 foot connection from the project. 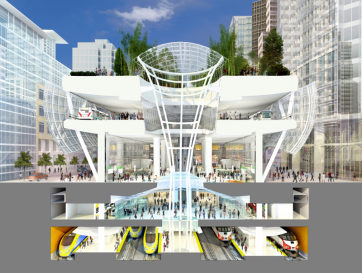 Yet on Sept 9, 2021, with little fan fare the TJPA Board accepted the IPMT’s recommendation to ax the Connector. While two of the Board members appeared to recognize the value of the link, the rest showed little understanding of or even interest in the subject. All seven members of the TJPA Board ended up going along with the recommendation.

With a moving walkway to Market Street the Salesforce Transit Center would soon take its place among the great transit-connecting centers of the world. Without it, the Center would remain largely a disconnected backwater.