In preparation for MTC’s Program and Allocation Committee’s October 12, 2022 meeting, the MTC’s staff, struggling to keep the ever more expensive BART Phase II project as one of its top candidates for State and federal funding, bought into the VTA’s project cost estimate of $9.0 billion, despite the fact that it was $140 million dollars below the year old Federal Transit Administration estimate of $9.14 billion. Despite BATWG’s attempt to warn MTC of both the VTA’s discounted price and the inherently excessive cost of the project, Staff plowed ahead and on October 26th the MTC Board accepted the VTA’s $90 billion price and placed the project in its Major Project Plan Category 1, Level I category. On November 3rd, just seven days later, Eliyahu Kasminser’s excellent article on the project in the San Jose Mercury quotes VTA officials as acknowledging that the price of the project was now $9.3 billion, a price that is virtually certain to further increase.

In order to avoid having to further increase the size of the single bore tunnel, which already stands at 53 foot, 3 inches in diameter (equal to the height of a five story building), VTA planners call for the platform at the train level of San Jose’s Downtown Station to be only 22 feet in width.

This seems narrow. If necessary, pedestrian throughput experts should be called in to verify the adequacy and safety of the platform. 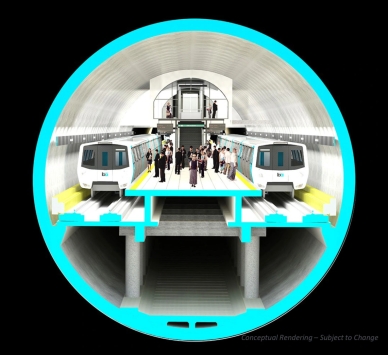 You may be thinking well, Santa Clara County is a wealthy place and if they want to waste their money on a potentially defective, gold plated subway it’s their business. If only that were true.

That giant sucking sound you hear is of yet another hugely overpriced BART project, this time pulling funds desperately needed for projects elsewhere in the Region southward into San Jose.

According to the Mercury, the transit officials overseeing the construction are already saying that “they have a plan to fill the yawning gap between project costs and available funding. They are asking the Biden Administration for a ‘historic federal grant totaling $4.6 billion…’” This for a project whose costs have soared from $5.3 billion in 2014 to $6.9 billion two years ago to $9.3 billion today, and whose estimated completion is projected to be 34 years after Santa Clara County voters first approved the project.

Realizing just how costly and controversial the project has become, San Jose Mayor Sam Liccardo and other municipal politicians recently commissioned a Peer Review Team of “experts” to conduct an independent evaluation of BART Phase II. But that too has gone sour. See article entitled BART Phase II – Unfinished Business elsewhere in this newsletter.