On November 17, 2022 MTC made a video presentation of highways and their future relevance in the Bay Area. https://mtcdrive.app.box.com/s/s1hvkzwn94sc7l0p7h0yspmecugopger

During the presentation MTC planner Alex Eisenhart, using many interesting photos and video clips, carefully explained the problem in an unusually clear and forthright manner. His main point was that adding lanes to roadways does not reduce congestion. The presentation is well worth a look and we recommend it.

Caltrans has a long and storied history of adding lanes to solve traffic problems. In a dynamic and densely built-up area such as the Bay Area, this has never worked for more than a short period of time, but which did and still does do is keep thousands of highway planners and engineers happily engaged in carrying out their “mission”.  However, it wasn’t long before the folly of Caltrans’ approach began to be recognized.

By the early 1960’s people were starting to catch on to just how destructive the highway-building frenzy was getting to be.  Horrified at how destructively Oakland has been sliced up and bulldozed to make way for freeways, the people of San Franciscan rose-up and cried “ENOUGH” and the highway builders…. with SF City Hall 100% on board….got stomped. As a result, the Pan Handle Freeway , Golden Gateway Freeway and Scott/Disvisadero Freeway were never built. Later the Central and Waterfront freeways were demolished, and instead of being widened to eight lanes, six-lane Upper Market Street was cut to four.

But for Oakland, Los Angeles and other cities throughout California it was too late. Attempting to get ahead of traffic congestion by actions that were certain to attract new roadway users was, and still is, a loser’s game. 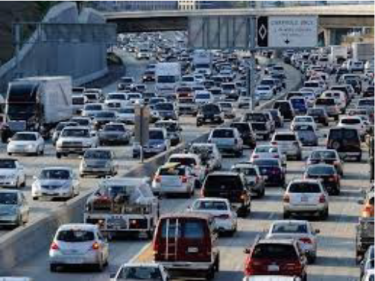 As Mr. Eisenhart said in his presentation, when the congestion levels on highways and busy arterials are eased for any reason, it frees up space and therefore sets the stage for more driving. Anything that takes cars off a congested highway or arterial eases traffic congestion only until new drivers arrive to take advantage of the eased conditions. Yet to this day roadway expansion is still being promoted in some quarters as a congestion reliever.

There are better ways to go. Making transit more convenient, more frequent, more reliable, safer and better-connected is a necessary first stop. But more will be needed. Short of financial or other incentives, the only thing that limits congestion in areas like the Bay Area is congestion itself. This applies whenever a lane is added, or bottleneck removed, or new passenger rail service begun, or highway shoulder converted to express lane. While measures that give travelers options other than driving certainly have merit, the overriding problem that continues to generate dangerous air-polluting traffic where people live work and play is too much driving.

Congestion will not be reduced until it is addressed and dealt with directly. In other words, it can no longer be ignored or side-stepped as has largely been the case so far. If we allow congestion in the Bay Area to remain at pre-Covid levels, the hundreds of millions of hours a year lost in roadway backups will continue. Is that acceptable?

Some towns and cities have already started to take steps to protect themselves from the apparently endless onslaught of automobiles. Berkeley protects itself through rigorous parking restrictions and draconian street patterns. San Francisco’s approach is to limit parking, widen sidewalks and make expensive street changes designed to divert traffic to other streets. The San Francisco County Transportation Authority talks of charging to drive in congested areas but so far has not acted.

Unfortunately, none of these local restrictions get at the basic issue which is that highways and many arterials are filled with too many cars driving in too much congestion too much of the time. Unless and until local and regional officials come up with a solution that is affordable, simple to administer and easy to enforce, those with the most tolerance for stultifying traffic congestion will continue to determine how bad it gets.