Bay Area transportation infrastructure projects tend to cost much more than expected (and in some cases more than necessary) and invariably take much longer than expected to complete. It appears that the Phase II BART subway proposed for San Jose may be no exception.

The following critique responds to the presentation made to the BART & VTA  “Special Committee” meeting at BART’s Oakland Headquarters on May 31, 2019. Santa Clara Valley Transportation Authority (VTA) is proceeding with its 16 mile long, two-phased extension of BART from the current Warms Springs terminal through San Jose to a future terminal station in Santa Clara. Phase I, covering the first 10 miles of the project will be constructed mostly on viaduct and include the Milpitas and Berryessa Stations. Phase II will proceed from Berryessa for six miles in mostly subway and include the Alum Rock, Downtown San Jose, Diridon and Santa Clara stations. Phase II is where things really get expensive. According to the EIR, the total cost of Phase II is projected to be $4.7 billion. It is anticipated that bottom of the tunnel extending for five of the six miles of this phase will be 121 feet below street grade (equivalent to the height of a twelve story building) and that the tunnel hole needed for the entire 5 miles will be 55 feet 10 inches in diameter. This raises several important questions: 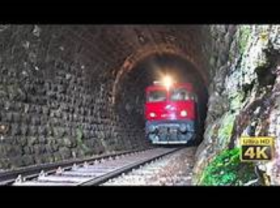 1. Why is the tunnel between stations so large?  To accommodate the width of two sets of BART tracks separated by a 24 foot wide platform plus safety walkways, the downtown San Jose stations are placed in a steel and concrete tube whose outside diameter is a humongous 54 feet 2 inches, requiring a tunneled hole almost 56 feet in diameter.  But the four stations account for only 10% of the length of the subway. So why should their width determine the size of the tunnels in the remaining  90% of the subway? Sizing the tunnels between the stations based upon need rather than on what happens inside the stations would cut the amount of dirt to be hauled away from the project by at least 60%, thereby reducing the number of truck loads of “spoil”  rumbling along the streets of San Jose by over 80,000.  There appear to be two ways of avoiding so large a hole  between stations. The first would be to replace the station center-loading platforms with two side-loading platforms, thereby allowing the diameters of the tunnel connections to the stations to be reduced from 55 feet 10 inches to about 35 feet. The second would be to separately excavate two 25-foot diameter tunnels instead of the proposed 55 foot 10 inch diameter tunnel.

2. Why is the subway so deep? San Francisco’s Market Street subway contains three below grade levels: the mezzanine (fare collection) level, the Muni operating level and the BART operating level and yet the BART tracks lie only 70 feet below street level. Why should the bottom of the San Jose subway…with only one train level…be 121 feet below grade? (65 feet to the top of the subway plus the 56 foot high subway)

3. With respect to the Downtown San Jose Station, why is the platform so narrow?  Since the Region is projected to continue to grow significantly in both jobs and population, and since subways usually tend to last for hundreds of years, it seems likely that a 24-foot wide platform would become grossly overcrowded long before the end of the economic life of the subway.  BART’s downtown San Francisco platforms are 35 feet wide for a reason.

Tunnels are frequently touted as eliminating construction effects at street level. And that’s true…between stations.  But stations, whether tunneled or not, require significant openings in the street including such street disrupting elements as construction access holes, escalators, emergency stairways, ventilation structures, elevators and utility relocation. As anyone who suffered through the 5-year construction mess that San Francisco’s tunneled Central Subway made of Chinatown knows full well.

For the above reasons, should the need to reduce construction costs ever arise, there are plenty of opportunities to reduce costs.  Optimal savings could be achieved by significantly reducing the size of the tunnels between stations and by locating the subway tracks as close to street grade as practicable.

This article was featured in Newsletter Issue 14. Click here to go back to the newsletter.