The extension of Caltrain into downtown San Francisco is currently derailed.

Nineteen years have passed since the passage of SF Prop H. On November 9, 1999, 69.3% of the voters defined the downtown extension of Caltrain (DTX) as San Francisco’s No. One transportation priority. The first Federal grant allocated to help build the Transbay Transit Center/Downtown Extension Project arrived two decades ago. In 2010 the Obama Administration approved an additional $400 million to pay for the construction of the huge 70-foot deep passenger train station beneath Transbay Transit Center (now called Sales Force Transit Center) at First and Mission Streets. The State of California kicked in by transferring 19 acres of State-owned downtown San Francisco land to the City, which has brought about the construction of 19 separate high rise buildings in the immediate vicinity of the Center.

August saw the opening of the SFTC. Despite the recent structural “challenges”, all who have passed through the facility have applauded its open and inviting design. In addition its unique rooftop public park has quickly become a neighborhood icon, a popular lunch destination for nearby office workers and a major stopping point for tourists and many others. But something’s missing. There are no trains and, as a result San Francisco’s outstanding high-volume intermodal terminal appears destined to operate at far below its design capacity for years if not decades to come.

The longer the extension of Caltrain is delayed, the more the Sales Force Transit Center (SFTC) will come to be regarded as a betrayal of public trust, an improper use of State and Federal transportation grants and a waste of money.

On the bright side, when the trains finally do get to downtown San Francisco there will be an immediate mode shift from auto travel to train travel. When the tens of thousands of new train riders begin passing through the new Transit Center and underground pedestrian ramps to the heart of the Financial District and the Market Street subways, the SFTC will come to life and take its place among the great passenger rail melting pots of the world. The creation of a comfortable and reliable passenger rail alternative to the ever growing number of daily automobiles flooding onto San Francisco’s streets is long overdue. END_OF_DOCUMENT_TOKEN_TO_BE_REPLACED

The Bay Area Transportation Working Group (BATWG) and many San Francisco transit advocacy groups have long supported the Caltrain Downtown Extension project (DTX). DTX will create a high quality north-south alternative to driving into San Francisco. It was defined in November 1999 by 69.9 percent of the voters of San Francisco as the No. 1 transportation capital improvement priority. 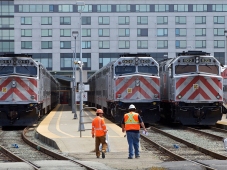 Yet for the last 40 months the multi-agency Rail Alignment and Benefits (RAB) study has unnecessarily delayed and obstructed DTX. And the disruption is continuing. The May 29, 2018 RAB release continues to place extra costs and other obstacles in front of DTX. Here are some ways of accelerating the process:
END_OF_DOCUMENT_TOKEN_TO_BE_REPLACED