Skip to content
HomeVTA’s Subway Extension Goes Off the Rails

Certain San Jose business interests, apparently in reaction to the Market Street subway construction program of yesteryear, have been stridently demanding that the San Jose subway be entirely tunneled, even at stations. These demands have radically increased the costs and risks of the project. 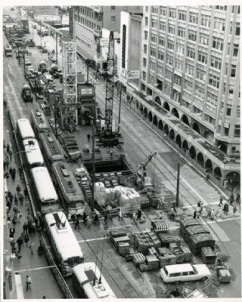 Maybe San Jose’s business people don’t know that despite the fact that all four of BART’s downtown stations were to be built by cut-and-cover methods San Francisco insisted that BART keep the City’s active streetcar lines in full operation throughout the subway construction period.

This decision made it necessary for the contractors to “shoofly” (shift) the streetcar tracks a total of 8 times:  1. eastbound track to the south edge of street and westbound track to north edge, 2. then both tracks on north edge, 3. then both on south edge, 4. then both back to the center….a process that was repeated at the end of the job. This added greatly to the time and cost of building the subway and also caused a significant amount of unnecessary construction disruption. But there are no streetcars on Santa Clara Street.

The conventional way of building subway stations is by opening up a portion of the street, then excavating down 20 feet or so, and then temporarily decking the opened section with heavy timbers, thereby keeping the street fully operational for most of the construction period while the heavy work goes on below. Done in phases, the opening and later repaving of the section at  station sites can be accomplished while at no time closing down the entire street. Despite these well-established station-building techniques used constantly throughout the world, a local San Jose business group has put the avoidance of any construction disruption above all other considerations, a demand that seems to have so far carried the day in San Jose. If this myopic, short-term attitude were to prevail it would add greatly to the time and cost of the project as well as increasing both construction risks and the future risks to BART riders during emergencies. Construction impacts are short-lived. Subways are built to last a thousand years. 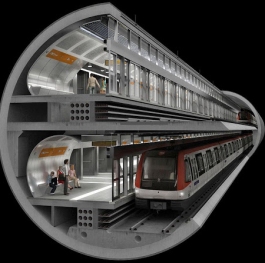 If an attempt is made to tunnel the entire 4.8 mile subway in a manner designed to avoid building the Downtown San Jose Station by conventional means, here are some of adverse effects:  Instead of two 25-foot diameter tunnels separated at stations by a 35-foot wide center-loading platform, a single bore 48-foot diameter tube would stretch from one end of the subway to the other. This would add significantly to the required thickness of the concrete tunnel lining and would increase the total amount of tunnel excavation by 84%, which in turn would require that an additional 1,000,000 cubic yards of tunnel spoil (equivalent to 85,000 truckloads) be excavated and hauled away. The current plan would require the addition of two expensive full length emergency egress platforms, and yet still make things less safe for BART passengers if trouble ever occurred in the subway.  According to the San Jose Downtown Association, with two 25-foot tunnels, the BART trackway would be 65 feet below Santa Clara Street but with a single 48-foot tunnel it would need to be 85 feet deep. This would mean longer escalators, longer elevators, longer emergency stairways, longer ventilation structures, longer utility runs, more maintenance and more arduous stair-climbing every time an escalator goes out of service.

Given the economic shutdown caused by COVID-19, it is incumbent upon the Agencies developing expensive public infrastructure projects to optimize safety and functionality while avoiding all unnecessary costs……beginning in this case with the replacement of the demands of a small group of businessmen for a disruption-free project with sound engineering.