Every now and then BATWG singles out a transit operation that we regard as particularly successful.

Caltrain definitely fits into that category. Between 2000 and 2019, Caltrain’s ridership soared from 29,728 riders a day to 63,597 riders a day, an increase of an extraordinary 114%. (Since last March, the pandemic has radically reduced these numbers as it has for transit operations around the world, but this does not detract from the past success of the Caltrain operation or for its potential for even greater success in the future. 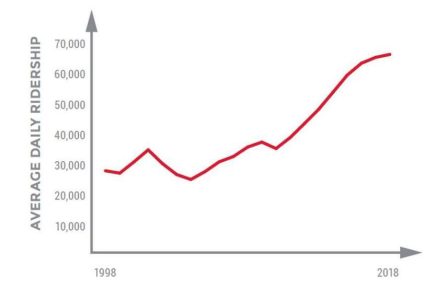 Caltrain’s cars are quiet and smooth running. This means that if you’re obliged to stand it’s much less taxing and that if you’re seated you barely notice the station stops. Virtually all of the stations are well designed and architecturally pleasing. Many of them located within easy walking distances of downtown centers.

Caltrain is a 77-mile long passenger rail line extending from Gilroy at the south end of Santa Clara County through San Jose and along the Peninsula with stops at each of the 12 San Mateo County Cities to San Francisco’s Fourth and King Terminal. The service benefits each of its three member counties, as well as to the rest of the Region. When Caltrain is extended 1.3 miles to the Sales Force Transit Center in downtown San Francisco, its usefulness to the Bay Area will further increase. Underscoring the success of the system over the last 20 years there has been a steady increase in commute and non-commute ridership, including a significant increase in the number of southbound commuters from San Francisco. Caltrain provides a vital passenger intercity and commuter rail service to the entire West Bay as well as to the rest of the Bay Area.

Despite having to pass through dozens of grade crossings, pre-COVID, Caltrain was recovering over 70% of its operating costs from the fare box. This was matched only by BART whose trains travel exclusively in fenced-in right-of-way with no grade crossings. None of the Bay Area’s other rail and large bus operators come anywhere close to matching Caltrain’s extraordinarily high fare box recovery ratio.

The Caltrain operation is managed and overseen by a nine-member Joint Powers Board comprised of 3 members from Santa Clara County, 3 from San Francisco County and 3 from San Mateo County. A measure of the cohesiveness of this body over the years is reflected in the operational success story outlined above. In order to maintain its excellent passenger rail service, the Board will need to continue its collaboration as it responds to the ridership and funding challenges brought on by the corona virus pandemic.